The Kori Bustard is an omnivore and one of the heaviest birds on the African continent. In fact, some birds have been found to weigh almost 20 kilograms.

Due to their large size and confidence, you’re likely to spot kori bustards quite easily when driving in the game parks. This is a terrestrial bird that is characterised by its long neck and feet, and the black crest on top of its head. Each eye is highlighted by a white strip above it. The top, visible part of the body is brown, while the underside is a lighter cream colour. The shoulders are highlighted with a black and white checked pattern. Because they are so heavy, Kori Bustards opt for walking; flying only when it is absolutely necessary. Still, when they do fly, their true power is witnessed as they glide through the African skies almost effortlessly. Their walk is elegant and slow.

The Kori Bustard lives in open plains and grassy savannahs, preferably with some trees and shrubbery. However, in some cases, they may be found in more arid areas. Essentially, the Kori Bustard prefers a habitat that is open enough for them to gauge their surroundings at all times. This bird does not tend to migrate unless food and water is in scarce supply.

The Kori Bustard can be found in South Africa and its surrounding countries (Mozambique, Namibia, Zimbabwe and Botswana), as well as in East Africa (Kenya, Ethiopia and Tanzania). The spectacular Etosha National Park (Namibia) and the Serengeti National Park (Tanzania) are both home to this species.

As an omnivore, the Kori Bustard feeds on berries, as well as little animals (including snakes and lizards), while juveniles feed mainly on protein-rich insects. Interestingly, the Kori Bustard drinks by sucking the water up, as opposed to using its bill to scoop it.

The Kori Bustard tends to stay in one area for as long as food and water resources are plentiful, rather than migrating. These birds are happy to amble the savannahs on their own, but are also often seen in groups or pairs. When faced with danger, the Kori Bustard will try to leave on foot before resorting to flight. As a group, they walk slowly and in a loose line across the grasslands as they forage for food.

To woo the female, the male Bustard will ruffle its feathers and inflate its neck, performing a dance to impress her. They can also inflate their bill, and make a loud noise, while she takes notice of his efforts.

Although it has not been established in the wild, Kori Bustards have been observed to reach between 26 and 28 years in captivity.

The Kori Bustard’s numbers are in gradual decline, but they are still readily found in the wild. Humans are their largest threat, as their habitat is endangered by urban development and pollution. They are also victims of hunting.

When you see a Kori Bustard for the first time you will be shocked at the size and amazing he/she is. They are so beautiful. 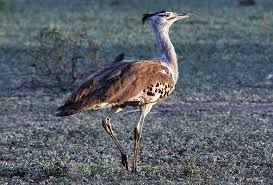 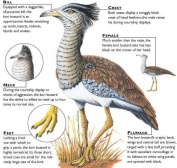